A Scrapbook Layout Mistake....What Would You Do?

on August 07, 2013
"The best laid plans of mice and men." or in this case scrapbooker.  I made so many mistakes with this layout.  I did not estimate the amount of hexagons on the page correctly.  I didn't like the original plan of embellishments above the photo.  I tore the background paper several times.  I did not measure the proper cutouts for the hexagons.  It was crazy!

So how do you fix mistakes?  Some of it you just live with.  Some of it you hide and at times it throws off the balance of the page.  Misjudge something, adjust the design.  How do YOU fix or hide your mistakes?

Rock-a-bye:  I seized an opportunity of a special moment with mom and daughter sleeping to take a photo for Ali's baby book as well as her scrapbook. 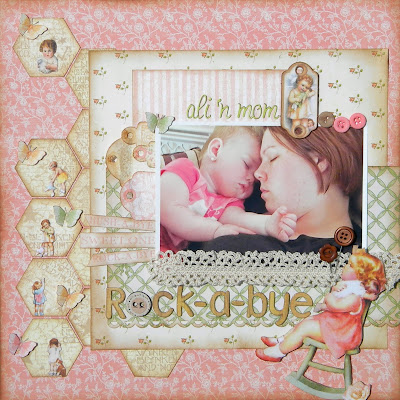 What started out as a simple, straightforward page ended up a bit of a nightmare.  Once I placed the hexagons I had planned on cutting out some of the smaller images from Little Darlings paper.  I estimated wrong.  Most of the cutouts were too large.   I ended up cutting out the tiniest of figures.  It was hard but well worth the effect.

The tags were on top but proved to be too busy.  I tried about 4 other items to my utter exhaustion to fix it when I tore some of the foundation paper.  So in goes Graphic 45's Little Darlings chipboard tag.  I'm not crazy about how the element looks in this position, but I was trying to make the best of it. 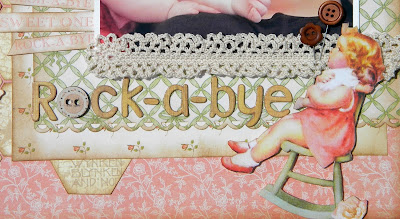 After cutting out the little girl in the rocking chair nothing seemed to work that would make this fix in the way I had planned.  This correction worked out nicely.

I ended up satisfied with the results with the exception of the tag at the top of the paper.  Maybe you can give me a tip on how to fix torn paper.

It never hurts to share your mistakes.  It hurts to not share and not get help.  It works for me!

Have A Crafty Day!

This year of all the years I'm very excited about the Holiday Season:  Thanksgiving and Christmas.  The music, the sights, and sounds all put a spring in my step.  I'm already thinking about Christmas decorations.  I created this Gingerbread People garland to remember the times of the smell of gingerbread cookies baking and the fun our family had decorating them.

Using a pattern of a gingerbread man cut 9 shapes or what would fit the length of where you are going to put your garland. Stitch around the edges by hand using the embroidery floss. Place two Glue Dots® … 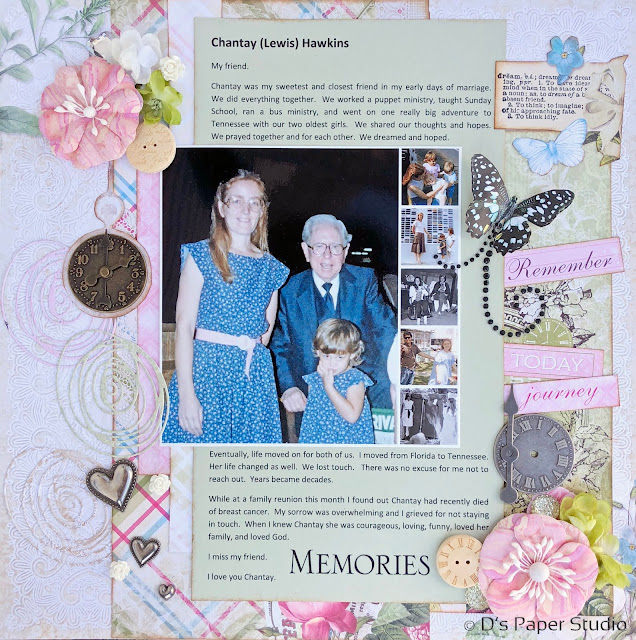 Remembering A Friendship: A Scrapbook Layout

It has taken me a while to post this.  Even now it is hard, but I want to share with you the frailty of time.

During a reunion on this past 4th of July holidays, I found out a dear friend had passed away in December.  I was taken aback.  She was younger than me.  But mostly I began to feel a great deal of regret.  Here is our story.

I knew Chantay when we were both freshly married and had our little girls.  We hooked up at church.  She was married to my husband's cousin.  We began as friends and ended up sisters.  We did a lot of church ministry together for the kids.  We did a puppet ministry in the church as well as taking it on the road to share the gospel.   We also planned, started, and ran a bus ministry for the kids in our greater community.  We took our girls to the General Assembly in Tennessee and visited a lot of well know sites.

We laughed together and cried together.  We were truly friends.

Regrets
Life got busy.  We both had more children which took time from each ot… 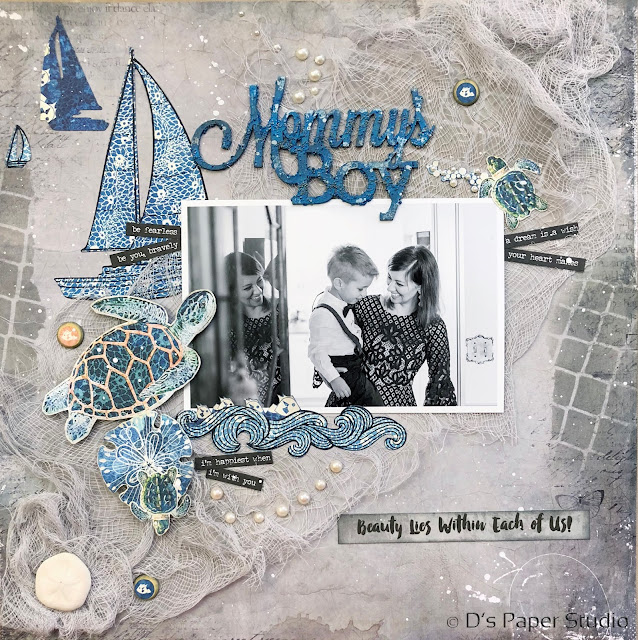 Beach and Garden collections themes together, a non-beach photo...a wedding...let your imagination roll outside what you see to what you imagine.  Keep your scrapbooking/creating fresh by mixing up themes and colors.  I remember the day you could hardly find matching theme paper unless it was a birthday or something like that.  Now everything seems to be "themed."  That is great...but I dare you to mix it up, keep it fresh, love the journey.

I love the greys of 49 Market Tattered Garden and I love the blues of Graphic 45's Sun Kissed collections.  Blue Fern Studio's "Mommy's Boy" plus a beautiful photo of my daughter and her son stirred in a pot of mixed media gets this creation.